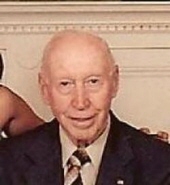 Leo F. "Red" Rush, 84, of Claysville, Pa. died at 6:30 p.m. Wednesday, March 12, 2008 in his home after battling a cancer related illness for the past year. He was born March 24, 1923 in Morris Twp., Washington Co., a son of Alvie Melvin Rush, Sr. and Nellie Elizabeth Beabout Rush and had resided in the Claysville area since 1952. Mr. Rush was a member of the First Baptist Church in Claysville and was a 1941 graduate of Nineveh High School. He was a veteran of the U.S. Army serving in World War II as a S/Sgt with Co. G, 114th Infantry in Rhineland, Northern France and Central Europe. He earned the Purple Heart, World War II Victory Medal, American Theater Ribbon, Distinguished Unit Badge, GO 42 Hq 44th Infantry Div. 44 and One Bronze Oak Leaf Cluster, GO 95 Hq 7th Army 45 Good Conduct Medal, EAME Theater Ribbon and was involved in the Battle of The Bulge. Mr. Rush was an avid hunter, and enjoyed photography and playing poker as long as his health permitted. He was a member of the former Squaw Hollow Hunting Club and a former member of the Claysville Sportsman's Club and was a member and past commander (2 terms) of the James R. Hunt American Legion Post 639 in Claysville and was a founding member of the McGuffey Park where he served as a volunteer grounds keeper for several years and was also a member of the N.R.A. Mr. Rush was a member of the Masonic Lodge 447 F AM of Claysville, Lodge Council Chapter Consistory Scottish Rite Bodies in the Valley of Pittsburgh and the Syria Temple, A.A.O.N.M.S. and the Shriners of North America. He was employed by the former J. A. Fox Drilling Co. as a tool dresser for his father and later as a truck driver for Tim Walker Trucking Co. in Claysville and was last employed by Columbia Gas Transmission Corp. for approximately 35 years prior to retiring in 1987 as a Well Technician Specialist and was a member of the former Columbia Gas Quarter Century Club. On June 14, 1946 he married Virginia Lee "Ginny" Jones who survives. Also surviving are two sons, Louis P., husband of Faye Rush of Indianapolis, IN. and John L., husband of Donita Rush of Wheeling, W.Va.; a daughter, Nancy, wife of Neil Brownlee of Claysville; one brother, Allen Thomas Rush of West Finley; six grandchildren, Matthew, Chad and Corey Rush, Michael and Seth Brownlee, Megan Brownlee Alexander; 7 great grandchildren. Deceased in addition to his parents are three brothers, Calvin (Bud) Rush, Alvie M. Rush, Jr. and Jack L. Rush; one sister, Delsie Mae Burns. Friends will be received from 2 to 9 p.m. Sunday in the First Baptist Church in Claysville, Pa. where services will be held at 11:00 a.m. Monday, March 17, 2008 with Rev. Merle Timko officiating. Interment will follow in Claysville Cemetery. The family suggests memorial contributions be made to either the First Baptist Church, PO Box 26, Claysville, Pa. 15323 or Albert Gallatin Home Care and Hospice, 275 Meadowlands Blvd., Washington, Pa. 15301. Masonic Lodge 447 FAM will conduct a memorial service in the church at 5:00 p.m. Sunday. Graveside military rites will be accorded by representatives of the U.S. Army and the American Legion Post 639 of Claysville. Arrangements are under the direction of the Rush Funeral Home, Inc., Rogersville, Pa. Family and friends may view the obituary; send condolences and flowers at www.rushfuneralhomeinc.com.

To order memorial trees or send flowers to the family in memory of Leo rush, please visit our flower store.