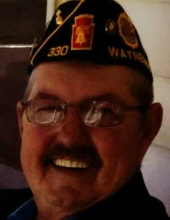 Born April 30, 1951 in Wheeling, WV., the son of the late Clarence and Mary (Gillespie) Tukesbrey.

John served in the United States Marine Corp. during the Vietnam War, where he was wounded twice and received two Purple Hearts. He married Song Tukesbrey on February 18, 2013 and they were happily married for eight years. John was employed with Penn Dot as a Bridge Inspector for 20 years until his retirement in 2009. He was a member of the Waynesburg American Legion Post #330, Waynesburg VFW Post #4793, Greene County Chapter #34 Military Order of the Purple Heart, Waynesburg and Waynesburg Moose Lodge 461. John loved spending time with his wife after retirement, riding ATV’s, boating, football and playing golf.

A burial will be held at the National Cemetery of the Alleghenies where military honors will be conducted by the Greene County Honor Guard and the United States Marine Corp. active duty on Tuesday, February 8, 2022 at 12:30 PM.

Please view and sign the online tribute wall at www.kestersonfh.com.

To order memorial trees or send flowers to the family in memory of John r. tukesbrey, please visit our flower store.

National Cemetery of the Alleghenies

National Cemetery of the Alleghenies