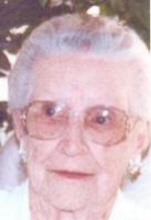 Jeannette G. Wise, 100, of Toledo, Oh. and formerly of Graysville, Pa. died Saturday, February 23, 2008 in the Lutheran Home of Toledo. She was born January 19, 1908 near Limestone, W.Va. a daughter of Simon L. and Edna Cunningham Guthrie and had resided in Graysville prior to moving to Toledo in 1944. Mrs. Wise was a former member of Unity Presbyterian Church in Graysville, Pa. and was a life member of the VFW Auxiliary Post #2510 of Toledo, Oh. She was last employed by the Toledo Board of Education for 25 years. Mrs. Wise enjoyed playing bingo, doing crossword puzzles and spending time camping at her cottage in Oak Harbor with her many special friends. Her family wishes everyone to remember her zest for life, the fun she had and the stories she shared with her family and friends. She was first married to the late Roy H. Tedrow and in 1946 she married Harry L. Wise, Sr. who is also deceased. Surviving are her son, Harry L. Wise, Jr. of Toledo; fifteen grandchildren, Kim Wise Bradeberry and Tim Wise, both of Toledo, Stephen Tedrow of Florida, Norma Jean Grimes Grable and Charles Thomas Grimes, both of California; Debbie (Tedrow Zajicek, Roberta Tedrow Ackamn, Lisa Tedrow Jackson, Kathy Tedrow Kramer, Judy Lewis Price, Paul and Roy Tedrow and James Lewis all of Pa., Linda Tedrow Milliron of W.V. and Ronald Lewis of Ohio. 34 great grandchildren; 27 great great grandchildren. Deceased in addition to her husbands are two sons, Jack and Gene Tedrow; one daughter, Charlene Grimes; one grandson, Tom Lewis; three sisters, Virginia Creighton, Maude Fordyce and Ruth Day; two brothers, Willis and Kenneth Guthrie.

To order memorial trees or send flowers to the family in memory of Jeanette wise, please visit our flower store.